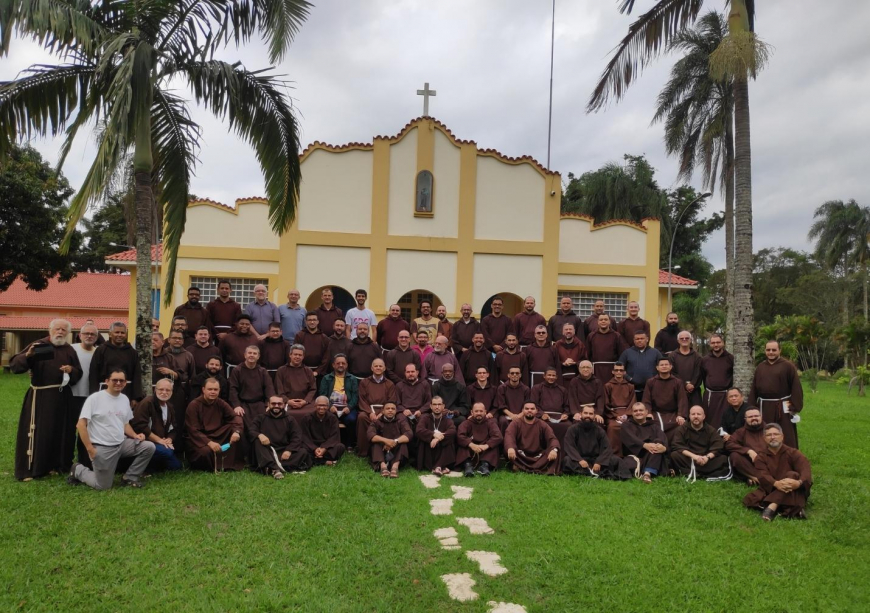 Formators and JPIC members gathered together at San Pedro, in Brazil

From 21st – 26th of March 2022, Formators and JPIC members gathered together at San Pedro, in Brazil to reflect about the Ratio, Ratio Formationis Localis, formative realities and Scuola Fratrum. It was a great moment of praying together, deep reflection about the Ratio and Ratio Localis, importance of including JPIC in formative process.

In formation we have to give lots of freedom to our young students and accompany them to grow to be authentic in their living – was the suggestion of Fra. Jose Longers one of the senior most formators from Brazil.Fra. Carlos Siva one of our Capuchin Bishops was present with us witnessing to his fraternal spirit and said that now he misses very much the long cherished Capuchin fraternal life. And he said that he comes back to our fraternities often to relive those moments of Capuchin Brotherhood.Fra. Tiago Santos da Silva and Fra. Evandro gave inspiring sessions everyday morning explaining the insights of the Ratio on each stages of formation. They also tried to give concrete examples from the local formative realities. It was followed by a time for insights and sharing the formators.

Fra. Jaime Rey explained in detail some of the important aspects of our Capuchin identity. The proprium for the Capucin Franciscan is to have the same experience of God that Brother Francis had. When asked to explain about his experience of God Br. Francis replied saying: God is good; all good and totally good etc Br. Francis experienced God as all good.

The formation team is called to enter into the mystical sacredness of the formee because he is a consecrated person. They are called to allow themselves to experience this sacredness and bear witness to that. In this way the formees will be able to experience the gift of God which has within the total good/goodness. What is our unique identity is that we are brothers who called to witness to the Gospel values in the fraternity. We live together, discern and take decisions as a community. As Capuchins we are the Order of brothers and here the community plays a vital role in our growth process and fraternal living.

Brothers Charles Alphonse animated the second session everyday with some thoughts on our Affective psycho-sexual maturity, Inner Healing and Integrally Optimistic Franciscan Goodness. He and Fra. Jaime also responded to the questions of the participants. Br. Joel de Jesus, the General Secretary for JPIC joining the other team members inspired the gathering about the important role that JPIC can play in formation.CCB is one of the conferences that has done a lot of preparations with the new text of the ratio and this gathering gave them possibility to understand the basic principles of our charism and identity. With the help of Fra. Tiago and others they have brought out a commentary and a reading guide to the Ratio. It will be of great help to the formators.

In his video message Fra. Mariosvaldo, the General Secretary for the Mission encouraged the participants to understand well the fraternal principles of the Ratio and apply them to the local formative context.

CIF for America: The international Councilors for Formation namely, Brs. Roberto Martinz, Tiago, Ramon Morillo and Brian Tracy gathered together after the sessions to discuss and share about their formative experiences in the past two years. It also helped them to clarify their doubts about how to work on the Ratio Localis. One of the main points taken up was about collaboration in formation. They also discussed about the advantage of having a common formation houses (novitiate and post-novitiate) at the conference level. They also welcomed the newly appointed CIF member for CCB Br. Adrian Borges de Lima.One of the very touching realities of CCB is that it has many lay brothers vocations. And they being part of JPIC witness to our Capuchin Charism at the periphery taking up inspiring and challenging ministries.