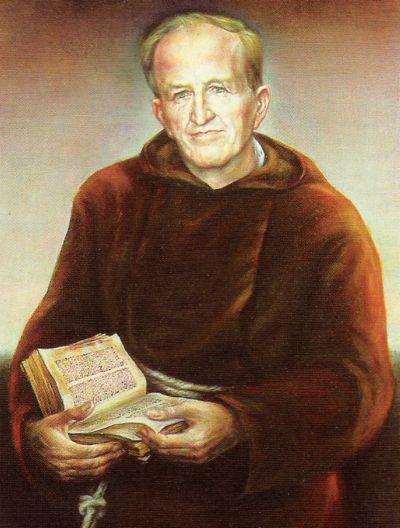 Alojzy Kazimierz Kaszuba was born on June 17, 1910 in Lviv, then in Polish territory but now in Ukraine, to Karol, a worker, and Anna Horak, a homemaker, both of them Franciscan tertiaries. He began his schooling with the Capuchins, who cared for the parish. Finishing school, against the wishes of his mother, he asked to be admitted to the Capuchin friars on June 3, 1928. Soon after he began the novitiate in Sędziszów Małopolski and was given the name of Br. Seraphim, even though he would have preferred Stanislaus.

Moving to Krakow on September 10, 1929, Br. Seraphim professed temporary vows and then made his perpetual profession in 1932. On March 11, 1933, in the Capuchin Church in Krakow, he was ordained priest by the laying on of hands and prayer of consecration of Bishop Stanisław Rospond.

Along with the ordinary pastoral and ministerial work, Br. Seraphim was given the obedience to study Polish philology at the philosophy department of the Jagiellonian University, graduating June 17, 1939. His first pastoral assignment was the Capuchin student house in Razwadów and the care of the Capuchin publications The Seraphic Ascent and Peace and Good.

At the outbreak of the Second World War on September 1, 1939, the Servant of God was in Lviv helping his mother who would pass away on April 1, 1940. It was there that he heard the news of the German invasion of Poland and experienced the invasion of eastern Poland and Lviv by the Red Army.

After his mother’s death, Br. Seraphim accepted the invitation of his confrere Bolesław Wojtuń and moved to Ludwipol in Volhynia, beginning a pilgrimage from parish to parish, village to village, to make up for the absence of priests. In this he was also fleeing the constant threat of death because he was under the close surveillance of the UPA, the Ukrainian Insurgent Army.

At Christmas 1940 he was at Karasyn in Volhynia, but the opening of the German-Russian front caused the destruction of the larger part of the villages of the region. Without losing heart, together with his parishioners, Br. Seraphim took refuge first in Bystrzyca and then in Dermanka.

In December 1941 Br. Seraphim was arrested by Ukrainian militia on the false accusation of possessing weapons and a radio. Released on Christmas Eve, he began to visit the Polish families in areas by then under Soviet control.

In November 1943, during one of the attacks of the UPA, he ventured away from Emilczyn and took refuge in Stara Huta, in the territory of the Army of the Polish Resistance, where there were also present 8,000 Catholic refugees.

In Spring 1944, after the German retreat, the Red Army entered Volhynia a second time. Then, following the Yalta Conference, there began the time of deportation. The Servant of God too would have had to have been repatriated, but on August 11, 1945 he left the repatriation train and decided to stay in Volhynia. Thus, from August 1945 until April 1958 Br. Seraphim was a pastor, recognized by the communist authorities, of a parish that extended for many square kilometers.

On April 11, 1958 the communist government deprived Br. Seraphim of his priestly rights, at the same time closing all the churches of Równe, Zdolbunów, Ostróg, and Sarny. Though asked by the government to leave Soviet territory, Br. Seraphim, with the support of the Christian community, continued his apostolate, now illegal. He left Równe, first going to Sambor and then to Kazakhstan, ending up in Crimea at Christmas 1961, before being in Kiev and then Leningrad, where he remained until 1963 until departing for Latvia.

On March 6, 1966 Br. Seraphim was arrested for ‘vagrancy’ and sentenced to five years of exile in Arykty, Kazakhstan, and on the following August 6 was transferred to Arszatynsk, where he worked in a bakery. His health, already tested by his earlier pastoral effort and now by the heavy work of bookbinding, stoking in a hospital, and as apothecary, became delicate such that he could no longer work.

On November 16, 1966 the sentence of exile was revoked and Br. Seraphim was able to get to Astana, where he took up again his pastoral work. Then on December 22 of the same year he was arrested again and sentenced to eleven years imprisonment in a home for the elderly, handicapped, and deaf at Mala Timofijewka. In February 1968 he escaped and resumed his clandestine apostolate.

On August 7, 1968, having heard of the death of his sister Maria, Br. Seraphim sought to return to Poland, arriving only on the 19. After having visited Krakow he reached the friary of Wrocław where he intended to stay only briefly, but his state of health forced him to stay in Poland until June 13, 1970, when, having recovered and obtained the necessary permissions, he returned to Kazakhstan. Two episodes from this period are noteworthy: in the small Kazak town of Taincza the authorities gave permission for a chapel to be built but with the tacit order that Br. Seraphim never offer Mass there. The Christians of the place followed the command, even though they otherwise continued to welcome Br. Seraphim. Also in these years Br. Seraphim went to small town in Uzbekistan because the local priest there had become a disciple of Bishop Marcel Lefebvre.

On September 19, 1977, on their way back to Lviv after traveling to Rowne, the car in which Br. Seraphim and others were traveling broke down and the passengers had to make the rest of the trip on foot in bad weather. A Ukrainian Catholic lady took Br. Seraphim in as a guest, but during the night of September 20, 1977 he passed away in the room where he was staying, sitting in a chair and bent over his breviary. The funeral was held on September 22, 1977 and Br. Seraphim was buried in the Janowski cemetery in Lviv.