The Order of Capuchin Friars Minor numbers a new venerable among its ranks: Cardinal Guglielmo Massaia. On December 2, 2016, Pope Francis signed the decree to set forth as venerable this son of St. Francis as one who lived heroically both the theological and cardinal virtues. This is the first step of official recognition, on the part of the Church, of the virtuous journey of this Capuchin.

The Servant of God, the seventh of eight children, was born in Piovà in the Italian region of Piedmont—the land of John Bosco—on June 8, 1809. On the same day he was baptized with the names Lorenzo Antonio. His parents were farmers, humble and devout. He lived his childhood with his family and later came under the guidance of his older brother Guglielmo, who was the pastor of the church in Asti.

After completing his studies as a seminarian at the Royal College of the same city, in order to follow his missionary ideal he entered the Capuchin Order and was invested in the habit on September 6, 1826, taking the name of his own older brother: Guglielmo. Following the studies of philosophy and theology (1827 – 1833), he was ordained priest in Vercelli on June 16, 1832. At first he was a hospital chaplain, where he gained some elementary medical knowledge which would become invaluable later on in Africa. He then taught philosophy and theology from 1836 to 1846. In 1844, he was called to be a councilor of the provincial minister of Piedmont.

These assignments put him in contact with the court of Savoy, with diplomats, doctors, literary figures, and noted members of the Piedmontese clergy. In particular, he was confessor and counselor of Cottolengo, of the Marchioness of Barolo, of Silvio Pellico and the future king of Italy, Victor Emmanuel II.

The year 1846 was decisive for the evangelization of Ethiopia. After the collapse of the Jesuit, Franciscan, and Capuchin missions of the sixteenth and seventeenth centuries, notwithstanding the erection of the Prefecture of Abyssinia, led by the Vincentian St. Giustino de Jacobis (1800 – 1860), Ethiopia lacked a Catholic hierarchy.

A happy intuition of Gregory XVI succeeded in bringing the missionary project to life. Accepting the suggestion received in a letter from the French explorer Antoine Thomson d'Abbadie, who had reached Lake Tana on March 9, 1845, the Pope entrusted the twentieth territory of the Galla, in southern Ethiopia, to the Capuchin Order. By decree of May 4, 1846, he erected the apostolic vicariate and appointed Massaia—according to the instructions of Fr. Venanzio of Turin, General Minister of the Capuchin Order—titular bishop of Cassia and first Vicar Apostolic of Galla. On the following May 24, the Prefect of the Propaganda Fide consecrated Massaia bishop.

At this point the most adventurous times of Massaia’s life began. He left Italy on June 4, 1846, succeeding in reaching his mission only five years later, on November 21, 1852, at the price of sufferings and unheard-of difficulties which were procured for him in particular by the Ethiopian Orthodox Abuna Salama III, who, excommunicating him, called him by the prophetic name of Abuna Messias.

Eight crossings of the Mediterranean and twelve of the Red Sea, four pilgrimages to the Holy Land, attacks in the Ethiopian Highlands, the Red Sea, the Persian Gulf and in Sudan, exiled four times, as well as imprisonments and a good eighteen near-death moments; these made up the larger part of his missionary story.

After many attempts at a beginning, the bishop’s activity took shape in well-defined periods: the mission in Galla proper (1852-1863), including the foundations of Assandabo, Gudru (1852), Ennerea (1854), Caffa and Lagamara (1855), and Ghera (1859); a stay in Europe (1864-1867) to reorganize the mission, compose catechisms in the local languages, publish the first grammar of the Oromo language, and to found a College in Marseille for young men aspiring to priesthood (April 15, 1866); The mission of Shewa, where the Emperor Menelik II treated him as his councilor and where, in 1868, the important mission stations of Fekerié-Ghemb and of Finfinru were founded. In 1889 these were made the capital of modern Ethiopia with the name Addis Abeba.

The exile, decreed on October 3, 1879 by Emperor Yohannes IV (who had defeated Menelik), made a definite end of this good activity of the Servant of God, forcing him to leave the Apostolic Vicariate of Galla, as he wrote to Smyrna on May 23, 1880, the vigil of the anniversary of his episcopal consecration.

After spending most of 1880 in Egypt, in the Middle East, and in France, the exiled missionary decided to go to the friary of Bastia in Corsica to, “think a bit on himself” and “to escape the honors that they had prepared for him in Italy in view of his merits.” He left Bastia on November 14, 1881 and settled in Rome according to the wishes of Pope Leo XIII, who asked him to write an account of his time in Africa and also promoted him to archbishop and, in 1884, to the rank of Cardinal.

In his last ten years, Massaia divided his time between the General Curia of the Capuchin Order, the Urban College of the Propaganda Fide, and the Capuchin friary in Frascati, where he edified both his confreres and illustrious visitors by his great poverty.

At the beginning of August 1889 he went to the Villa Amirante in San Giorgio a Cremano for some rest. On August 6, the feast of the Transfiguration, he died of a heart attack. Upon hearing of Massaia’s death, Pope Leo XIII exclaimed, “A saint has died.”

His remains were surrounded immediately by the veneration of authorities and by the people to whom he was dear. Notwithstanding precautions, his habit was cut up even up to his knees and his cord was taken. The funeral took place in the church of the Alcantarine friars in Granatello, with the cardinal archbishop of Naples officiating. On August 7 the body, in a triple coffin, was brought to Rome in a guarded railroad car. On August 9 a solemn funeral was celebrated in the church of Sant’Andrea delle Fratte in Rome. The body was entombed in the chapel of the Propaganda Fide in Verano and then, by his explicit wish, was translated on June 11, 1890 to Frascati, to the church of the Capuchins, where it remains to this day. It was there that he wanted to be buried, so that the quiet of death would not be disturbed by the noisy world, nor the holiness of the tomb be profaned by the luxury of a modern cemetery. Massaia’s reputation for holiness was already present in his life for his indomitable apostolic and missionary activity and it continued to be manifested after his death. Thus, his canonical process began in 1914.

Does this Capuchin friar have something to say to us today?

Cardinal Guglielmo Massaia is certainly one of the most significant missionaries of the Church and is considered by missionary historians as the greatest evangelizer of the nineteenth century. His example goes for us as well, in his gospel message as well as for the conditions in which he worked, in dangers and unending travels, for the temper of his character and for that organizational quality that helped him understand and realize a presence of an emerging church—but also precisely because of this a church worthy of the time of the apostles in its simplicity, essentialness, clarity, and  sensitivity to the character of those tribes that were evangelized.

Open to all the problems of evangelization, this Capuchin did not limit himself to his work in his own jurisdiction; he rather fostered, with suggestions and efforts from helpful people, the neighboring missions as well. He succeeded in overcoming legal and disciplinary barriers and opened himself, with effort, paying with his own life for the modern pastoral paths that we traverse easily.

For centuries the institutional Church had exported, particularly in mission lands, a European product. The Servant of God himself, in his early correspondence, exalted the same so-called western civilization over others. Arriving, however, after six years of daring and difficult attempts, in the Apostolic Vicariate of Galla, in the Ethiopian Highlands, Massaia perceived the need to unchain himself from every Eurocentric temptation.

As an apostle of Christ, he categorically refused to mix politics and religion.

“My feeling and my conviction,” he writes “was always contrary to the system of trusting in the favor of princes; it is something too fragile and too mixed with the passions to serve as a basis for a religious work, the nature of which must descend from above.”

He was a man as simple as water and he lived a holy life. He was full of living charity and did not spare himself when a brother was suffering, but was a prudent father with all the qualities one could hope for.

A missionary who for years lived on a handful of chickpeas, according to the ways of the Ethiopian hermits, and who, shortly before death, could write that, “all of the south of Ethiopia has heard the word of God, with Christians spread all over. For the rest, then, God will judge us, we for whom his will is enough.”

A old saint, bent over more by struggles, efforts, privations, and disappointments than by the years, who becomes an example of an evangelization free from human interests, dedicated purely to the good of souls. 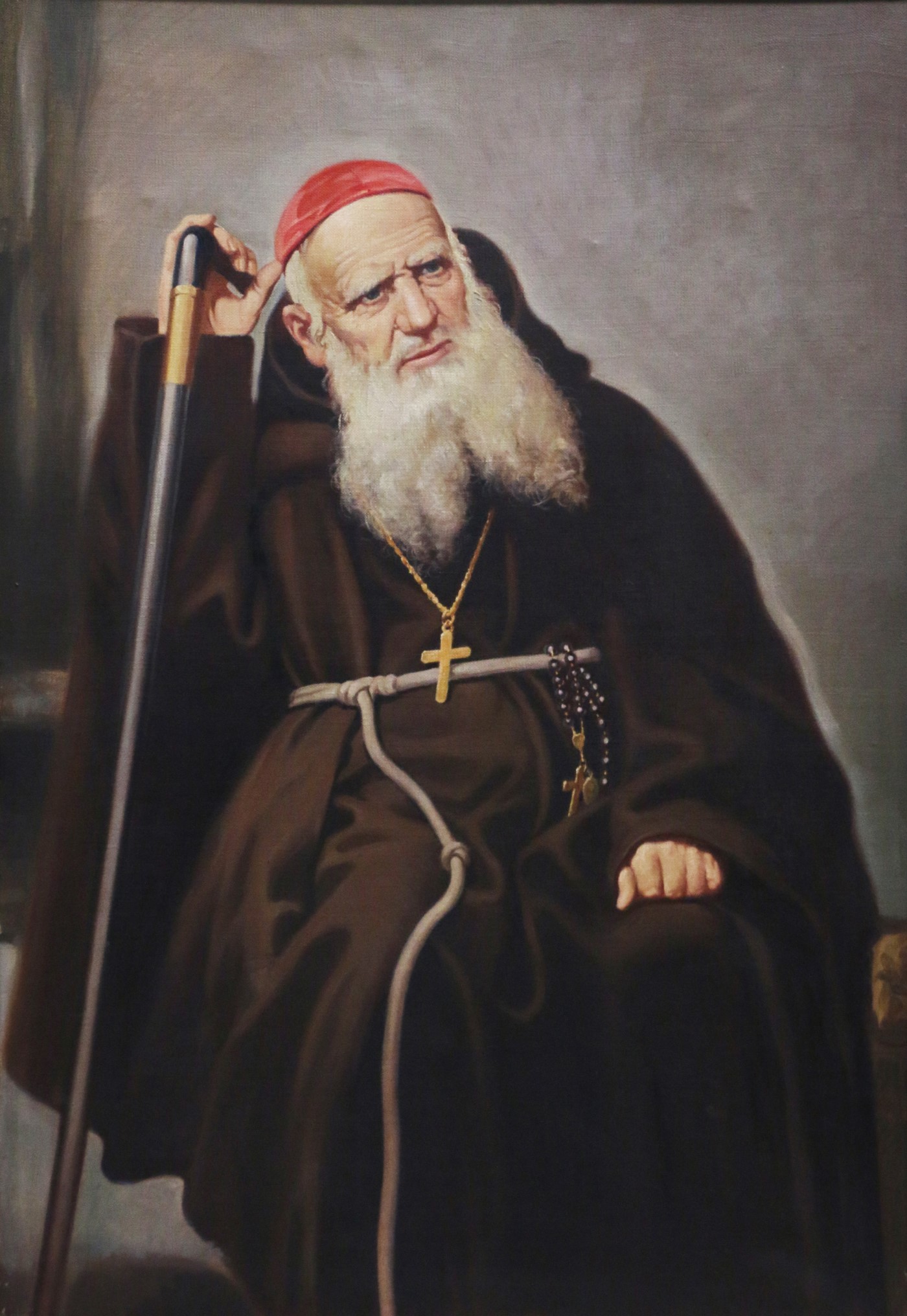