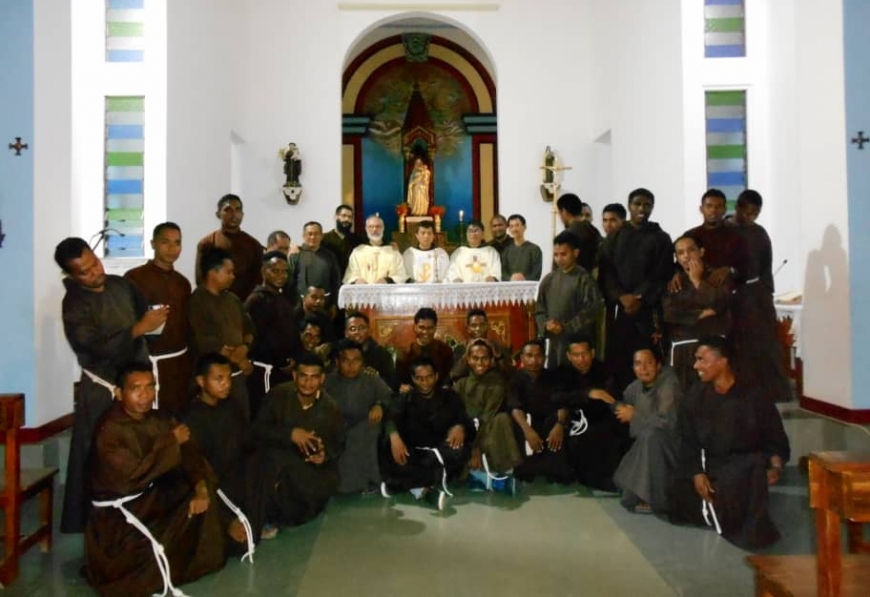 “The Minister General, upon receiving favorable counsel from the provincial ministers and councils of Portugal and Pontianak, Indonesia, as well as from the Major Superiors of CIC (Conference of Iberian Capuchins) and PACC (Pacific-Asia Capuchin Conference), having observed what, according to the law, must be observed (see Const. 119, 1.3; OG 8/25), having obtained the consent of his Council at the meeting of 21 November 2019, DECIDED to transfer the responsibility of the Presence of the Capuchin Friars Minor of East Timor, until now dependent on the Province of Portugal, to the Province of Pontianak, Indonesia.”

With these words from the decree of the General Minister, Fr. Roberto Genuin, the transfer of responsibility from one constituency –the Province of Portugal— to another –the Province of Pontianak, Indonesia— was proclaimed in the late afternoon of February 9, in the town of Laleia, the primary site of the Capuchin presence in East Timor. At a Eucharistic celebration attended by all the friars, the decree of the General Minister (Prot. N. 00051/20) was read after the Gospel both in English by Br. Hermanus Mayong (Provincial Minister of Pontianak) and in Portuguese by Br. Fernando Alberto (Provincial Minister of Portugal). In his homily, the celebrant – Br. Victorius Dwiardy, General Councilor (PACC) – pointed out that the Capuchin presence there was first initiated by the Province of Portugal, and then after sixteen years had arrived at this historical juncture when the Province of Pontianak was to assume responsibility. Br. Victorius also took the opportunity to refer to the Gospel proclaimed at mass, suggesting that the friars should be ‘the salt of the earth’ and ‘the light of the world’ as living and radiating witnesses to the Capuchin charism in these lands of the Rising Sun.

This transfer of responsibility does not mean that the Portuguese province will withdraw from this mission, which they began in 2003. On the contrary, they are aware they must continue to respond as best they can to the endless need regarding their language and culture which continues to be a central characteristic for the indigenous people both subjectively and outwardly. Thus, the willingness of the Portuguese friars to continue their mission in this part of the world must be kept alive, as must the cooperation of the various missionary groups who help them with these Christian communities entrusted to their pastoral care.

In the General Minister’s decree, this historical journey and transfer of responsibility was briefly summarized as follows:

The Capuchin missionary presence in East Timor was started by the Province of Portugal in 2003, in the village of Laleia, Manatuto district, Diocese of Baucau.

From the beginning, while working intensely to evangelize and establish a presence, the first missionaries soon made it a priority to implant the Capuchin Order in that country. Having very few material things and very little human resources, they attracted young people who expressed their desire to be Capuchin friars.

In 2006, responding to the needs of the formation programs, a new fraternity was created in a rented house in Dili, which in early 2009 was then transferred to a friary built in the meantime in Tibar, Liquiçá, Diocese of Maliana.

In addition to their commitment of implanting the Order, the friars also took on pastoral responsibilities in Laleia (parish ministry) and in Tibar, as well as some social programs carried out mainly in Laleia.