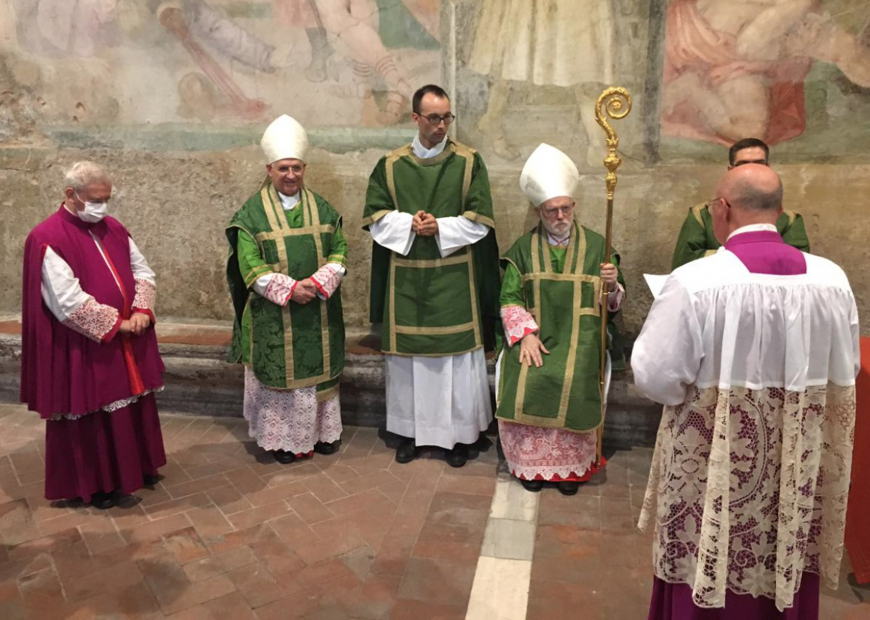 On Saturday, June 19, 2021 at 6.30 pm our confrere Card. Celestino Aós Braco, Archbishop of Santiago (Chile) took possession of the Basilica of Saints Nereo and Achilleo in Rome, which was assigned to him by Pope Francis when he created him Cardinal on November 28, 2020.

The ancient church entrusted to the care of the priests of the oratory (Congregation of St. Philip Neri) testifies to the fidelity and sacrifice of many martyrs in ancient Rome, and is a reminder even to this day, of the importance of fidelity to the testimony of faith.

The celebration was presided by Cardinal Celestino, entirely in Spanish, and was introduced by the reading of his Creation as Cardinal, followed by the Eucharist, which was enhanced in its solemnly by the singing of the basilica's choir.

The Gospel invitation to be not afraid, even if storms should shake one's boat echoed between the walls, amply frescoed with cruel scenes of many martyrs. Do not abandon yourself to fear, but rather "love and serve", as indicated by the motto chosen by the Cardinal for his coat of arms, now placed on the façade of the Church.

At the end of the celebration, what had happened was read aloud and then signed by many of those present, including civil authorities and representatives of the Chilean community in Rome, as well as the Pope's Delegate.

The photos beautifully captured the memory of this precious event, among which is one with the fraternity of the General Curia and Br. José Angel Torres, Vicar General, representing the General Minister.

More in this category: « Come to “Le Celle” of Cortona The Online Meeting of the New Ministers »