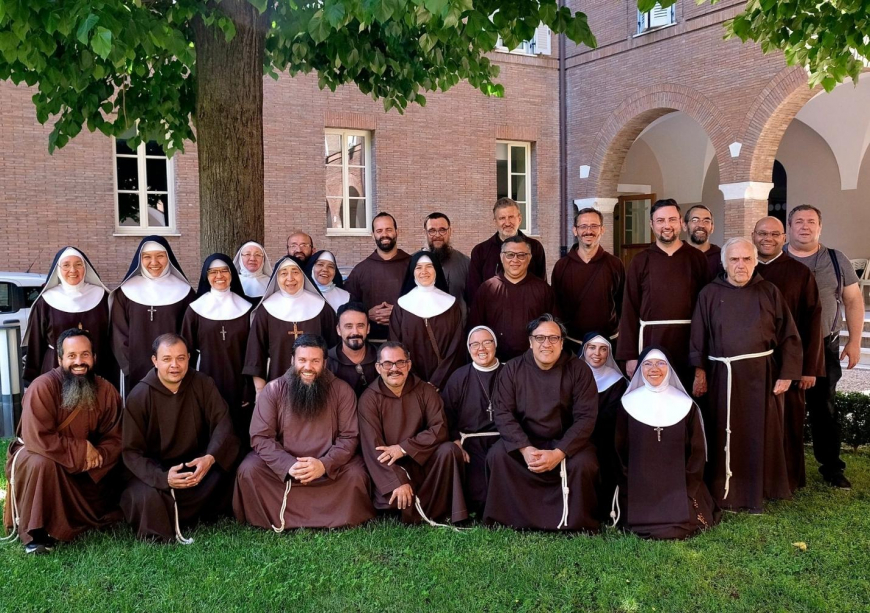 We announce with great joy that the Ongoing Formation Courses organized by the General Secretariat for Formation have resumed after approximately two years of suspension due to Covid.  From May 1 to 21, 2022 the course, entitled “Living According to the Form of the Gospel in the Manner of Francis and Clare” was held in Spanish and Portuguese, with stops in Rome, Frascati, Assisi and other significant Franciscan locations.

The course was attended by 10 Capuchin Poor Clares from Chile, Peru, Argentina and Bolivia, and 15 Capuchin friars from Spain, El Salvador, Brazil, Puerto Rico and Argentina, led by our Br. Sidney Machado and Br. Leonardo González. The objectives of the course were: an on-site study of the Franciscan sources; a survey of specific values of our charism; reflection on our manner of presence in the world and in the Church according to the spirit of the Friars Minor, promoting justice and peace. In the morning there were visits to Franciscan places (or to Rome) and community celebrations, and also moments of personal reflection; in the afternoon the course included three hours of study on subjects relating to Franciscan spirituality.

The General Secretariat for Formation offers these three-week long courses in several languages to support the opportunity for renewal of friars who, in their mature years after some time has passed since initial formation find themselves immersed in responsibilities and commitments, sometimes experiencing situations such as over-activity, fatigue, etc. The Courses are a great opportunity to stop and breathe, to find a balance between action and contemplation, between apostolate and interiority, between inside and outside. It is about walking through Franciscan places, deepening once again the meaning of vocation and taken by the hand of Clare and Francis, rediscovering the joy of being brothers (and sisters), walking according to their own way of life. The course is also open to all brothers who hold responsibilities in formation.

More in this category: « Canonization of Two Sisters of the Capuchin Family International Fraternities – Amazonia »