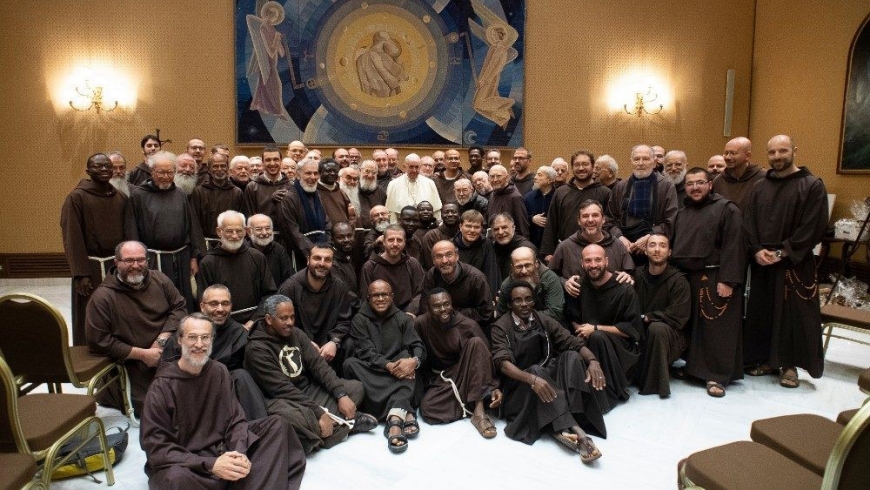 Pope to Capuchin Friars Minor: Be humble and poor missionaries

Pope Francis meets 73 Capuchin Friars Minor of the Italian Province of the Marches and speaks of vocations, poverty, forgiveness, and evangelization. Below is a Vatican News translation of the article published in the "L'Osservatore Romano" newspaper.

The Pope spoke first of all of God's call, reminding the Friars that He calls in different ways. God does so by inviting at all times to conversion. This is a powerful choice, a decision that involves taking the consecrated person forward on the road of life. One of the risks is that of not allowing oneself to be involved and to be questioned by God. Pope Francis called this "religious acidity", the source of unhappiness.

Consecrated persons become "collectors of injustice", he said, according to the typical attitude of those who always feel they are victims and therefore complain constantly. The Pope referenced Saint Teresa of Jesus in this regard, and how she warned against the temptation to consider oneself the object of injustice. This “whining”, said the Pope, is an attitude that must be countered by conversion. Entering the community means preparing to move from conversion to conversion, because that leads to humility.

Witnessing to Christ with meekness and poverty

Francis then stressed the importance of speaking not with adjectives but with the theology of nouns, as the Franciscan spirit indicates. He went on to speak about “being missionary”. As a consecrated person, said the Pope, we no longer think of ourselves, but of living as witnesses. We should not proselytize, he continued, but preach Jesus through our lives rather than our words, as Saint Francis of Assisi himself suggested.

It is no coincidence that even contemporary saints like Mother Teresa of Calcutta enjoyed unanimous respect in their lives, on the part of believers and non-believers, precisely because of their witness. The Pope invited the Capuchins to offer this witness with meekness but above all with poverty, which must be lived in practice, without forgetting that the devil enters from the pockets, he said.

A worldly spirit damages the Church

Pope Francis also spoke about the worldliness into which the Church sometimes slips. A worldly spirit hurts the Church, he said, so much so that Jesus in His prayer asks the Father to distance us, not from the world, but from the spirit of the world that ruins everything and causes falsehoods. We need humility, said the Pope to counter this evil.

Another temptation for the Church is clericalism, the child of worldliness, continued Pope Francis. This is what risks transforming pastors from servants to masters. It is important to rediscover the structure of service within the ecclesial community. The Pope then invited the Capuchins to live their Rule, accepting others and respecting them. Fraternal communion is natural, he said, it is not created artificially. It is a grace of the Holy Spirit and is nourished by forgiveness.

Pope Francis went on to speak of mercy. God never tires of forgiving, he said, it is we who are tired of asking for forgiveness. The Pope mentioned two examples in this regard: the first being that of an elderly Capuchin who lived in Buenos Aires. Thinking back to the forgiveness and absolution he had granted the many faithful who lined up for his confessional, Pope Francis said he dispelled any doubt of having been too merciful, by telling Jesus that He Himself had given him the example. The second is that of the character of Father Felice portrayed by Alessandro Manzoni in the "Betrothed", a sign of concrete mercy among the needy and sinners. The Pope also said we need to rediscover compassion and the ability to cry.

Europe in need of evangelization

Pope Francis went on to speak of the need to evangelize Europe. The young Churches can help the Old Continent refresh the embers of a faith that is still burning, he said. The Pope referred to the testimony of the many Filipino women who work in the service of the wealthiest families. In their daily dialogue with the children and young people of these families, said the Pope, they actually become catechists.

Pope Francis concluded his meeting with the Capuchin Friars Minor by leaving to them the task of initiating a process of witness to the young people who admire the Franciscan spirit and open themselves to the charism of joy and simplicity that the example of Saint Francis offers at all times.