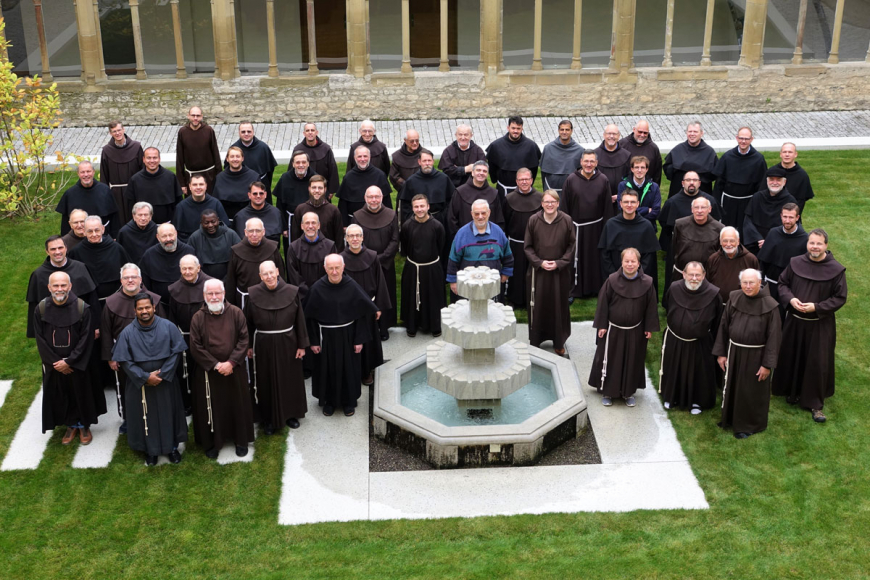 On October 14-16, 2021, eight centuries after the arrival of the first Franciscans in Germany, members of the Order of Friars Minor, Friars Minor Capuchin and Friars Minor Conventual gathered in Würzburg to celebrate a Chapter of Mats. The participants focused on the question: “How do we want to live the Franciscan charism in Germany today and in the future?”

Eight hundred years ago, some followers of St. Francis of Assisi left Italy and crossed the Alps to Germany. It was a truly exciting beginning. The Franciscan fire spread rapidly and thus, even today in 2021, many people are still guided by the ideas and ideals of the founder of the Minorites. Franciscan life in Germany has always been multifaceted and alive.

The three Franciscan Orders of men in Germany used this 800th anniversary as an opportunity to meet. This was their second inter-Franciscan meeting. The first was held in Hofheim in 2017. As many as seventy friars, between the ages of twenty-two and eighty-five, gathered to discuss the history and current challenges of their communities.

The Chapter of Mats is a very ancient tradition that dates back to the beginnings of the Franciscan fraternity and to Francis of Assisi himself. At that time, the friars gathered in Assisi for the feast of Pentecost. However, due to lack of space, they slept on straw mats—hence the name.

The Most Reverend Johannes BAHLMANN, OFM, Bishop of Óbidos, Brazil, stopped briefly at the Chapter of Mats. He is also of German origin. He addressed the friars, saying, “We as Franciscans must look to our spirituality.” He went on to say that it is important to rebuild the existing trust in the Order, which is still very strong in Germany, and start again with confidence. “Onward,” he said, quoting a conversation with Pope Francis, “Let’s go! Let’s continue!”

The Conventual Franciscan Minister Provincial of Germany, Friar Andreas MURK, said: “The Inter-Franciscan Chapter of Mats was very successful; the chemistry of the meetings was right. The liveliness and open fellowship all impressed me.” He believed the Chapter gave the participants concrete ideas for further cooperation, particularly “the inspiration of those early friars who went forth eight hundred years ago, whose vivacity and courage are still a model for us today.” He also expressed his gratitude for the presence of Friar Igor SALMIČ, the Assistant General for the Centralis Europae Foederatio (CEF).

The Minister Provincial of Germany for the Friars Minor, Friar Cornelius BOHL also had a positive opinion: “If we Franciscans encourage each other, especially in the joy of our vocation, then I have no fear for the future.” For the friars, the 800th anniversary of Franciscan presence in Germany is an inspiration for their mission going forward. “We must take care of today’s tasks. Let’s get started!”

The Capuchin Franciscan Vicar Provincial of Germany, Friar Helmut RAKOWSKI, is encouraged by the history of the first friars in Germany. “Franciscans see the world with God’s eyes and think about things from the margins of society. This is our charism. There will always be people in the future who will live the ideal of St. Francis.”

More in this category: « The International Formation Council The PAX ET BONUM Bulletin »