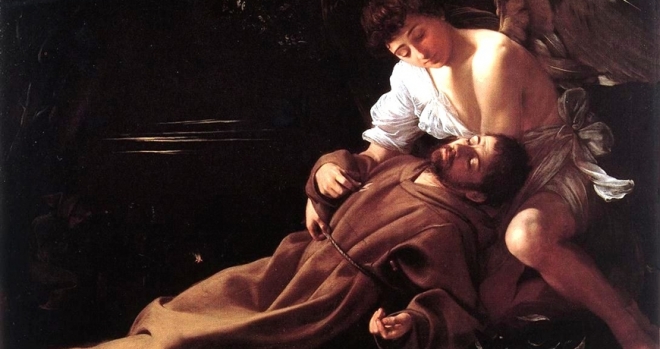 He is probably the best known and popular of the saints, who down to today fascinates many people, particularly poets, painters and those committed to the poor and to the protection of the natural environment.

Giovanni Bernardone (his real first and last name) was born in Assisi in 1181 or 1182. He was the son of Pietro Bernardone, a rich merchant in the textile business. He was born while his father was in France on business, and after his return – perhaps to commemorate his trip – his father named his son “Francesco.” Looking forward to his future as a merchant, from his childhood Francis attended the school at the Church of St. George In Assisi. Thanks to the education he received there Francis knew how to read and write and also knew the Bible, especially the Gospel and the Psalms. The years of his youth passed lightheartedly, in the company of his peers, playing, sharing in dances and suppers, but also practicing business in the shop of his father. He sought to obtain the dignity of a knight which for many of this new middle class was the greatest of ambitions. Therefore, in 1198, he participated in the insurrection of the citizens of Assisi against the power of the prince Conrad of Urslingen and in 1202 in the war between Assisi and Perugia. In this latter, in the battle of Collestrada, Francis was captured and spent almost a year in prison. Thinking again to take part in the war of Count Gentile who, at the request of Pope Innocent III, went to Southern Italy and Sicily to put an end to the anarchy that had spread there. Francis withdrew from this campaign, however, it is said under the influence of a mysterious dream in which he heard this question: whom is it better to serve, the servant or the master?

We can look for the beginnings of Francis’s conversion around the year 1202. He speaks of it himself in words that are few but clear: “The Lord gave me, Brother Francis, thus to begin to doing penance in this way: for when I was in sin, it seemed too bitter for me to see lepers. And the Lord Himself led me among them and I showed mercy to them. And when I left them, what had seemed bitter to me was turned into sweetness of soul and body. And afterwards I delayed a little and left the world.” (Testament, 1-3) According to St. Bonaventure, an important moment in the process of Francis’s conversion was a mysterious vision: Christ on the cross commanded him to rebuild the church which was falling into ruin. These two events, the meeting with the lepers and the vision of the Crucified, don’t contradict each other, but constitute the successive stages of the process of conversion. Francis understood the call of the Crucified literally: around 1206 he began to take up a hermit’s life and worked in the rebuilding of small ruined churches that were found near Assisi and in the vicinity. To cover the expenses of the reconstruction, he used money from his father’s shop. The violent resistance of his father against this change of life, especially against the use of money from his business to help the poor and for the reconstruction of the churches, ended with a legal process before the bishop of Assisi, when Francis publicly renounced his right of inheritance, returning to his father even the clothes he had been wearing. Leaving Assisi, at first he worked in the kitchen of the Benedictine Abbey of San Verecondo and then served the lepers in Gubbio. After his return to his own city the date of February 24, 1208 was very important for him, when he heard the words of the Gospel on the sending of the apostles and took them as addressed to him personally. He began thus a life of extreme poverty, dedicated to the itinerant announcement of the Gospel, especially the call to penance. He lived on the offerings of the inhabitants of Assisi which he begged going door to door.

He did not have the intention of founding some new structure in the Church, and did not seek followers or companions. Nevertheless, after some months they began to come to him (1208/1209). They all came from Assisi or from the surrounding area and were witnesses of the transformation of Francis’s life: the citizen of Assisi Bernard of Quintavalle, the jurist Peter Cattani, Giles of Assisi, the priest Sylvester, the peasant Giles, Morico, an impoverished nobleman, Sabatino, Giovanni dalla Cappella, and the others. In the first companions we see all the social classes of the age represented. Francis then sent them two by two on mission to preach more by example than by word. The fraternity, after returning from mission, around 1209, was based in the hovel of Rivotorto, and a few months later moved to the Portiuncula – a little church dedicated Our Lady of the Angels which Francis had received from the Benedictines and that he had rebuilt. The Portiuncula became a sign of the poverty of Francis: he did not wish to receive any property, but only something lent to him.

The new fraternity had need of some kind of rule. This was made of some phrases of the Gospel which spoke of announcing the Good News, the duty of carrying one’s own cross, of following Christ and renouncing property. When the number of friars reached twelve, they went to Rome where Francis himself presented to Pope Innocent III the request to confirm their life. The request raised serious doubts for many Cardinals because of the radical way of living poverty and because of the fear of heresy. In the end Pope Innocent III, in 1209, approved this life orally. By the will of Francis the fraternity took the name “Order of Friars Minor,” even though they had previously used other names, such as, for example, “Penitents of Assisi.” Since the fraternity grew quickly in numbers (around 1220 there were already more than 3,000 friars), and the life raised new questions and problems for which the Rule, very generic in its content, did not give any answer, during the annual meetings of the friars, that is, the Chapters, instructions and norms were added that grew into a bulkier document (24 chapters), codified in 1221. Moreover, among the friars there came to be differences regarding the purpose and tasks of the fraternity (foreign missions? preaching? a life dedicated exclusively to prayer and contemplation?). Francis did not seek to resolve these difficulties on his own, but counted on the Holy Spirit who – as he believed deeply – would grant to the brothers to know what they had to do and how to proceed. In the end, with the help of Cardinal Hugolino of Segni and certain friars who were expert writers (Caesar of Speyer, Bonizio of Bologna) he wrote the definitive version of the Rule which was approved by Pope Honorius III with the bull Solet annuere of November 29, 1223. This is the Rule that down to today constitutes the foundation of the life of all the branches of the Order of Friars Minor. In the night of December 24/25, 1223, at Greccio, Francis made the Nativity crèche for the first time – a tradition that over the years spread all over Europe and from there to all the world.

The last period of life was very painful for Francis: he had an inflammation of the eyes from his time in the Holy Land during 1219-1220. Then we must add the receiving of the stigmata during the prolonged period of prayer in solitude at La Verna, in September 1224, when Francis had a vision of Christ in the form of a seraph of six wings and his hands, feet, and side were pierced. The stigmata were a sign of his particular election by God, but they surely brought physical pain and were an obstacle to walking and to holding anything in hand. Finally, there were the moral sufferings: Francis felt unable to influence the growing number of friars. He believed it was his fault that they were becoming less zealous or less understanding of the Gospel life. The care of the eyes, even though it was very painful (cauterization with hot iron), did not have a satisfactory result. Finding himself at the end, Francis asked to be carried to the Portiuncula. It was there that, surrounded by the friars, he concluded his earthly life on the evening of October 3, 1226. In the last hour before death he asked to be placed naked on the earth – he wanted to die absolutely poor, not having anything of his own. Already two years after his death, in 1228, Francis was proclaimed a saint by Pope Gregory IX (the former Cardinal Hugolino of Segni). At first his body was placed in the church of St. George in Assisi, and then in 1230 it was translated to the basilica dedicated to St. Francis, built for this purpose in Assisi, where it is still found today.

Francis is the author of the following writings: the Rule (in the unapproved version of 1221 and the approved version of 1223, together with other fragments edited at various times), the Testament, some letters (among others, To the Whole Order, To the Faithful, to Brother Leo), prayers, mostly of praise, and a collection of brief teachings called the Admonitions.