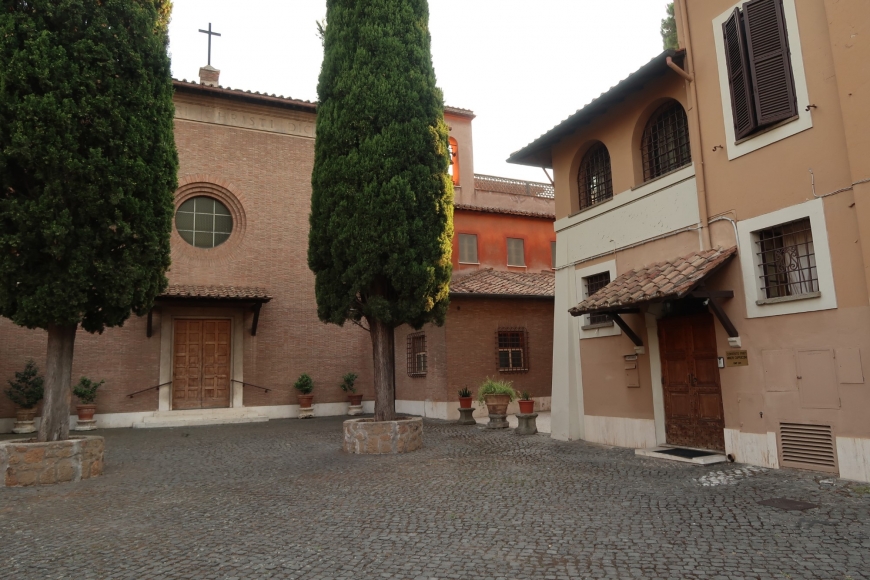 The Garbatella house in Rome has a special history. Originally a villa of Count Attilio Dario Pozzi of Rome and Countess Bulgarini of Siena, it ended up as a convent in the middle of the last century. The Pozzi family owned the entire hill on which sits the “Largo delle Sette Chiese” (Plaza of the Seven Churches), along with a further incline that leads to Via Pomponia Grecina; a hill-vineyard (the parallel rise is called Via di Vigna Pozzi) on which a villa was built based on a design by the Countess Lodovica Bulgarini d’Elci, wife of the count.

Not much is known of the family, only that the young wife of the Count died during childbirth. Raising his children alone, the count had to concede to their constant requests to sell everything "because the villa is too far from the center of town". The Count was reluctant, but eventually gave in and sold the villa and the land. The whole was purchased by the Capuchin General Curia at a favorable price, and on November 15, 1949, the Vicar General of the time, Br. Agatangelo of Langasco, presented to the family a certificate of affiliation with the Order, which is kept in the sacristy.

Upon asking the Capuchin Poor Clare Nuns of Via Piemonte to sell their monastery to the Order, the General Curia, then located on Via Sicilia, promised that a new convent at Garbatella would be built for them. However, it was necessary to subdivide the land on which buildings existed along Via Pomponia Grecina up to the area where the friary, church and Poor Clare monastery are located. In front of the house, a ground floor guest accommodation was built for relatives visiting the nuns. For several years, this was made available to the Community of St. Egidio, who opened a nursery school for the children of poor families in the neighborhood.

Initially, the chaplain for the nuns lived in the house together with a lay brother in charge of questing for them. In the 1970s, the house was refurbished as the main office for the Capuchin missionary magazine “Continenti” (once known as “Il Massaja”) and a guest house for missionaries. Later it was chosen as the headquarters of CIMPCap (at the time Br. Dino Dozzi was president) and more recently - during the renovation of the General Curia - as the residence of the Postulator for the Order.

Today four Capuchin friars live in the house: the guardian, Br. Bahlebi Idris Shekai of Eritrea; the vicar, Br. David Edvin Guerra of Guatemala, also a student at the Antonianum of Franciscan Spirituality; Br. Gerardo Gallo of Calabria, who works at the Vicariate of Rome; and Br. Egidio Picucci of the Marche. They provide spiritual assistance to the Nuns; celebrate Eucharist and hear confessions for the Disciple Sisters of the Divine Master; as well as helping out with masses and confessions in neighboring parishes. They are also called for visits to the nearby CTO hospital, where there have been several requests for assistance to the dying.