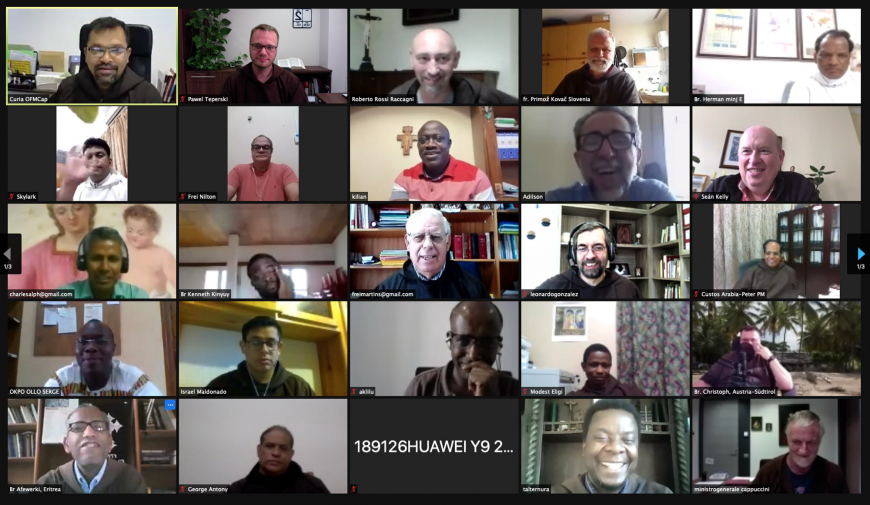 The annual meeting for new ministers, intended for training newly elected major superiors of provinces and custodies, have for the last two years been interrupted due to the ongoing pandemic.

For many years, the General Curia has hosted these weeklong formative meetings at the Frascati retreat center near Rome. They are regularly attended by the General Minister and the General Councilors, the various secretaries and officers of the General Curia along with that particular year’s group of newly elected major superiors around the world. The meetings are cast with a two-fold objective: to cultivate a spirit of fraternity among the newly elected as well as with the leadership in Rome, and to provide them with orientation in regards to activities of the General Curia, to the individual offices and services of the Order, and to administrative and juridical procedures within the Order and the greater Church relating to our religious life.

For the different levels of leadership to get to know one another is as important a part of the experience as is the information introduced. The newly-elected superiors get to know in person the General Minister, his Council and other officers in the Curia and vice-versa.

As was the case last year, the meeting could not take place in the usual Frascati location – due to serious restrictions caused by the pandemic. However, thanks to a decision by the General Minister and his Council, an online meeting was held each day from June 28 to July 2 (with a break on Wednesday) from 3PM until 5PM Central European Time (Greenwich + 1 hour).

The meeting took place on the ZOOM platform. With the use of multiple channels, some additional brothers (likewise scattered around the world) translated into Italian, English, Spanish, French, German and Portuguese. In addition to the friars of the Curia, a total of 51 provincial ministers and custodians participated in the meeting.

The General Minister gave an initial talk, followed by individual friars from the various offices of the Curia, who discussed their respective areas and outlined initiatives of collaboration. These friars included the general secretary; the secretary of economic solidarity; the secretariat for formation; the secretary for the missions; the order’s legal representative and vice-procurator; the general postulator (causes for canonization); the delegate for Secular Franciscans; the delegate for Capuchin Nuns; the director of the Office for Peace, Justice and the Integrity of Creation, and the manager of the office of communications.

After each presentation, a period of time was set aside for questions.

Although virtual meetings are no replacement for real meetings, the needs for orientation and training remain vital for new major superiors, and given the persistence of the current pandemic, the virtual gathering option proved the most suitable and effective way to make sure these needs were well met.